THE CURRENCY THAT PAYS SALVATION IS MADE OF BLOOD!

We were created from dust and Spirit, and CHRIST calls us to be CLEAN water.
Remembering that water can evaporate, and this is another MYSTERY.

“Forasmuch then as the children are partakers of flesh and blood, he also himself likewise took part of the same; that through death he might destroy him that had the power of death, that is, the devil;
And deliver them who through fear of death were all their lifetime subject to bondage.”
Hebrews 2:14,15

“Then shall the dust return to the earth as it was: and the spirit shall return unto God who gave it.”
Ecclesiastes 12:7

25 And as Peter was coming in, Cornelius met him, and fell down at his feet, and worshipped him.

26 But Peter took him up, saying, Stand up; I myself also am a man.

27 And as he talked with him, he went in, and found many that were come together.

28 And he said unto them, Ye know how that it is an unlawful thing for a man that is a Jew to keep company, or come unto one of another nation; but God hath shewed me that I should not call any man common or unclean.

29 Therefore came I unto you without gainsaying, as soon as I was sent for: I ask therefore for what intent ye have sent for me?

30 And Cornelius said, Four days ago I was fasting until this hour; and at the ninth hour I prayed in my house, and, behold, a man stood before me in bright clothing,

31 And said, Cornelius, thy prayer is heard, and thine alms are had in remembrance in the sight of God.

32 Send therefore to Joppa, and call hither Simon, whose surname is Peter; he is lodged in the house of one Simon a tanner by the sea side: who, when he cometh, shall speak unto thee.

33 Immediately therefore I sent to thee; and thou hast well done that thou art come. Now therefore are we all here present before God, to hear all things that are commanded thee of God.

34 Then Peter opened his mouth, and said, Of a truth I perceive that God is no respecter of persons:

35 But in every nation he that feareth him, and worketh righteousness, is accepted with him.

36 The word which God sent unto the children of Israel, preaching peace by Jesus Christ: (he is Lord of all:)

37 That word, I say, ye know, which was published throughout all Judaea, and began from Galilee, after the baptism which John preached;

38 How God anointed Jesus of Nazareth with the Holy Ghost and with power: who went about doing good, and healing all that were oppressed of the devil; for God was with him.

39 And we are witnesses of all things which he did both in the land of the Jews, and in Jerusalem; whom they slew and hanged on a tree:

40 Him God raised up the third day, and shewed him openly;

41 Not to all the people, but unto witnesses chosen before of God, even to us, who did eat and drink with him after he rose from the dead.

42 And he commanded us to preach unto the people, and to testify that it is he which was ordained of God to be the Judge of quick and dead.

43 To him give all the prophets witness, that through his name whosoever believeth in him shall receive remission of sins.

44 While Peter yet spake these words, the Holy Ghost fell on all them which heard the word.

45 And they of the circumcision which believed were astonished, as many as came with Peter, because that on the Gentiles also was poured out the gift of the Holy Ghost.

46 For they heard them speak with tongues, and magnify God. Then answered Peter,

47 Can any man forbid water, that these should not be baptized, which have received the Holy Ghost as well as we?

48 And he commanded them to be baptized in the name of the Lord. Then prayed they him to tarry certain days. Acts 10:25-48

10 And straightway coming up out of the water, he saw the heavens opened, and the Spirit like a dove descending upon him: Mark 1:10

30 This is he of whom I said, After me cometh a man which is preferred before me: for he was before me. John 1:30

8 And there are three that bear witness in earth, the Spirit, and the water, and the blood: and these three agree in one. 1 John5:8

14 How much more shall the blood of Christ, who through the eternal Spirit offered himself without spot to God, purge your conscience from dead works to serve the living God?  Hebrews 9:14

24 But the ship was now in the midst of the sea, tossed with waves: for the wind was contrary.

25 And in the fourth watch of the night Jesus went unto them, walking on the sea.

26 And when the disciples saw him walking on the sea, they were troubled, saying, It is a spirit; and they cried out for fear.

27 But straightway Jesus spake unto them, saying, Be of good cheer; it is I; be not afraid.

28 And Peter answered him and said, Lord, if it be thou, bid me come unto thee on the water.

29 And he said, Come. And when Peter was come down out of the ship, he walked on the water, to go to Jesus.

30 But when he saw the wind boisterous, he was afraid; and beginning to sink, he cried, saying, Lord, save me.

31 And immediately Jesus stretched forth his hand, and caught him, and said unto him, O thou of little faith, wherefore didst thou doubt?

32 And when they were come into the ship, the wind ceased.

33 Then they that were in the ship came and worshipped him, saying, Of a truth thou art the Son of God. Matthew 14:24-33

22 Let us draw near with a true heart in full assurance of faith, having our hearts sprinkled from an evil conscience, and our bodies washed with pure water. Hebrews 10:22

5 Jesus answered, Verily, verily, I say unto thee, Except a man be born of water and of the Spirit, he cannot enter into the kingdom of God. John 3:5 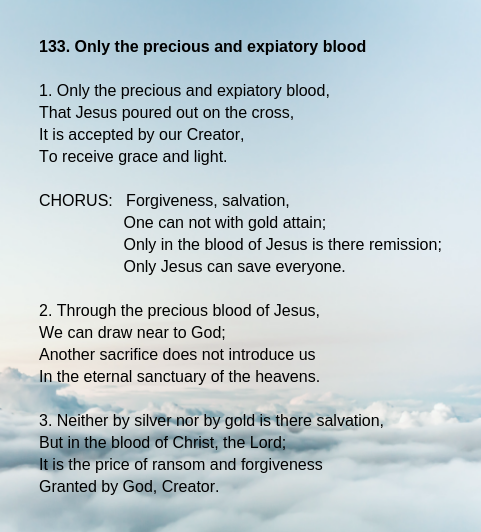 16  And Jesus, when he was baptized, went up straightway out of the water: and, lo, the heavens were opened unto him, and he saw the Spirit of God descending like a dove, and lighting upon him:

37  Now when they heard this, they were pricked in their heart, and said unto Peter and to the rest of the apostles, Men and brethren, what shall we do?

38  Then Peter said unto them, Repent, and be baptized every one of you in the name of Jesus Christ for the remission of sins, and ye shall receive the gift of the Holy Ghost.

47  Can any man forbid water, that these should not be baptized, which have received the Holy Ghost as well as we?

48  And he commanded them to be baptized in the name of the Lord. Then prayed they him to tarry certain days. Actos 10:47,48

4  Therefore we are buried with him by baptism into death: that like as Christ was raised up from the dead by the glory of the Father, even so we also should walk in newness of life.

6  Knowing this, that our old man is crucified with him, that the body of sin might be destroyed, that henceforth we should not serve sin.

7  For he that is dead is freed from sin.

8  Now if we be dead with Christ, we believe that we shall also live with him:

9  Knowing that Christ being raised from the dead dieth no more; death hath no more dominion over him.

10  For in that he died, he died unto sin once: but in that he liveth, he liveth unto God.

11  Likewise reckon ye also yourselves to be dead indeed unto sin, but alive unto God through Jesus Christ our Lord. Romans 6:3-11

18  And Jesus came and spake unto them, saying, All power is given unto me in heaven and in earth.

19  Go ye therefore, and teach all nations, baptizing them in the name of the Father, and of the Son, and of the Holy Ghost:

20  Teaching them to observe all things whatsoever I have commanded you: and, lo, I am with you alway, even unto the end of the world. Amen. Matthew 28:18-20