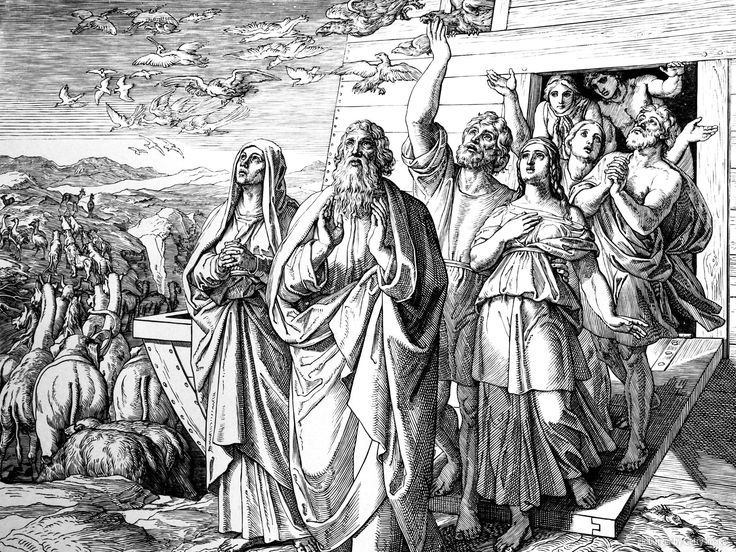 5 And God saw that the wickedness of man was great in the earth, and that every imagination of the thoughts of his heart was only evil continually.

6 And it repented the Lord that he had made man on the earth, and it grieved him at his heart.

7 And the Lord said, I will destroy man whom I have created from the face of the earth; both man, and beast, and the creeping thing, and the fowls of the air; for it repenteth me that I have made them.

8 But Noah found grace in the eyes of the LORD.

9 These are the generations of Noah: Noah was a just man and perfect in his generations, and Noah walked with God. Genesis 6:5-9

22 Thus did Noah; according to all that God commanded him, so did he. Genesis 6:22

1 And the LORD said unto Noah, Come thou and all thy house into the ark; for thee have I seen righteous before me in this generation. Genesis 7:1

5 And Noah did according unto all that the LORD commanded him. Genesis 7:5

6 And Noah was six hundred years old when the flood of waters was upon the earth. Genesis 7:6

9 There went in two and two unto Noah into the ark, the male and the female, as God had commanded Noah. Genesis 7:9

11 In the six hundredth year of Noah’s life, in the second month, the seventeenth day of the month, the same day were all the fountains of the great deep broken up, and the windows of heaven were opened. Genesis 7:11

15 And they went in unto Noah into the ark, two and two of all flesh, wherein is the breath of life. Genesis 7:15

6 And it came to pass at the end of forty days, that Noah opened the window of the ark which he had made: Genesis 8:6

11 And the dove came in to him in the evening; and, lo, in her mouth was an olive leaf pluckt off: so Noah knew that the waters were abated from off the earth. Genesis 8:11

13 And it came to pass in the six hundredth and first year, in the first month, the first day of the month, the waters were dried up from off the earth: and Noah removed the covering of the ark, and looked, and, behold, the face of the ground was dry. Genesis 8:13

15 And God spake unto Noah, saying,

1 And God blessed Noah and his sons, and said unto them, Be fruitful, and multiply, and replenish the earth. Genesis 9:1

13 I do set my bow in the cloud, and it shall be for a token of a covenant between me and the earth. Genesis 9:13

17 And God said unto Noah, This is the token of the covenant, which I have established between me and all flesh that is upon the earth. Genesis 9:17

20 And Noah began to be an husbandman, and he planted a vineyard: Genesis 9:20

29 And all the days of Noah were nine hundred and fifty years: and he died. Genesis 9:29

32 These are the families of the sons of Noah, after their generations, in their nations: and by these were the nations divided in the earth after the flood. Genesis 10:32

7 By faith Noah, being warned of God of things not seen as yet, moved with fear, prepared an ark to the saving of his house; by the which he condemned the world, and became heir of the righteousness which is by faith. Hebrews 11:7

5 And spared not the old world, but saved Noah the eighth person, a preacher of righteousness, bringing in the flood upon the world of the ungodly; 2 Peter 2:5

13 Son of man, when the land sinneth against me by trespassing grievously, then will I stretch out mine hand upon it, and will break the staff of the bread thereof, and will send famine upon it, and will cut off man and beast from it: Ezequiel 14:13

20 Though Noah, Daniel, and Job, were in it, as I live, saith the Lord GOD, they shall deliver neither son nor daughter; they shall but deliver their own souls by their righteousness. Ezekiel 14:20

38 For as in the days that were before the flood they were eating and drinking, marrying and giving in marriage, until the day that Noe entered into the ark, Matthew 24:38

20 Which sometime were disobedient, when once the longsuffering of God waited in the days of Noah, while the ark was a preparing, wherein few, that is, eight souls were saved by water. 1 Peter 3:20

5 And spared not the old world, but saved Noah the eighth person, a preacher of righteousness, bringing in the flood upon the world of the ungodly; 2 Peter 2:5